By Alvin B. Tillery, Jr. Director

Joe Biden, the Democratic Party’s presumptive nominee for president, has stated his intention to select a woman as his running mate in the 2020 race. We know from media reports that several prominent Black women are on Mr. Biden’s shortlist for the job. Many activists and pundits have argued that the selection of a Black woman running mate is one of the keys to mobilizing African American voters in November. What has been missing from this debate is survey data about how Black voters feel about this issue. 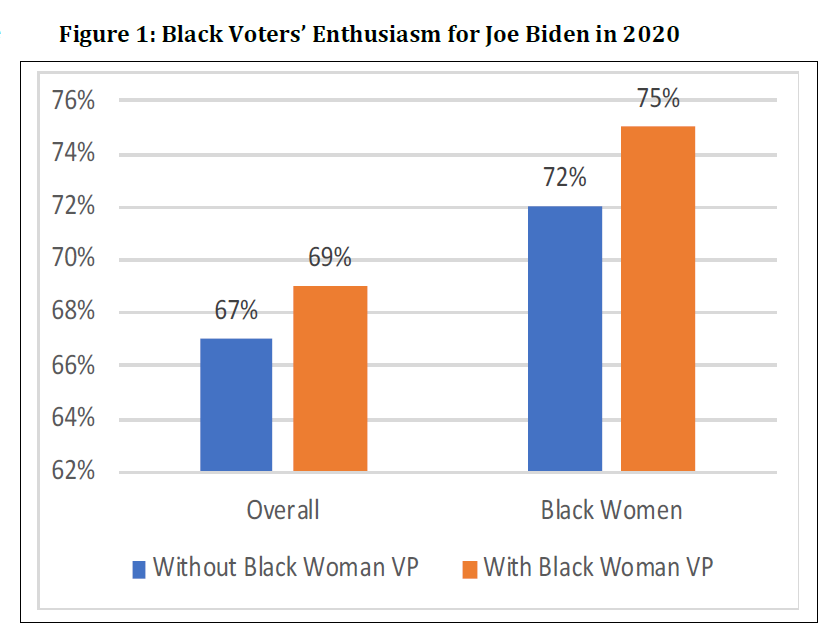 Working in conjunction with Dr. Nadia Brown of Purdue University, a leading expert on the politics of gender in Black communities, the  Center for the Study of Diversity and Democracy’s (CSDD) conducted a 45-item poll of 2,676 African Americans about their views on Biden selecting a Black woman for his running mate in the 2020 election.

The survey was a census-matched, internet panel recruited by Cloud Research/Prime Panels on behalf of the CSDD. The data were collected between May 27 and May 31, 2020.

The main finding is that 57 percent of African Americans say they would be more enthusiastic about supporting Joe Biden’s campaign if he selects a Black woman as his running mate on the Democratic Party’s ticket.

The survey asked the respondents to rate their overall enthusiasm for supporting Joe Biden’s campaign for president on a scale from 0 to 100 percent. As Figure 1 shows, the mean enthusiasm score for Biden among the respondents was 67 percent. The mean enthusiasm score for African American women is significantly higher than for the overall sample at 72 percent. When we subsequently asked the same respondents how including a hypothetical Black woman on the ticket affected their enthusiasm, Biden’s scores shifted to 69 percent and 75 percent respectively. While these gains in enthusiasm are relatively small, they are statistically significant at the .01 level. Moreover, given that recent polls of the general electorate have found that there is a sizable enthusiasm gap between Democratic and Republican base voters, these numbers point to a key dynamic for the Democrats. The fact that our poll also found that there is widespread support for almost all of the leading Black women whom the media have mentioned as contenders for the position means that Mr. Biden faces considerable freedom from Black voters to make his selection. At the same time, it is clear that Senator Kamala Harris and former Georgia legislator Stacey Abrams are the two most preferred candidates with 29 percent and 28 percent support respectively.

The Impact of the VP search on Black Women’s Support for Biden: