By: Alvin B. Tillery, Jr., Director

Public opinion and expert polls on presidential leadership have been a feature of the public culture in the US since the end of World War II. This period coincided with America’s transition from a society with public norms grounded in white supremacy, patriarchy, and homophobia. Despite this fact, there have been no major polls on presidential leadership on diversity and inclusion.

Working in conjunction Dr. Christina Greer of Fordham University, the Center for the Study of Diversity and Democracy’s (CSDD) conducted a poll of 113 academic researchers and asked them to rate the 14 modern presidents on both their overall leadership and rhetoric on diversity and inclusion using a scale ranging from 0 to 100. Barack Obama, who served as the 44th president, had the highest overall rating with a score of 75 points. President Donald Trump had the lowest overall score with 9 points. 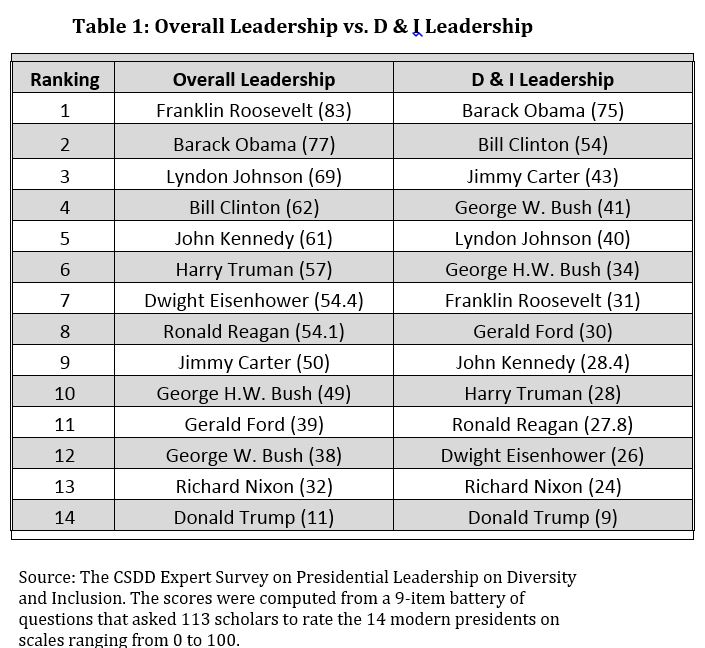 The respondents emerged from an invitation pool of 400 scholars who have published works dealing with presidential leadership on diversity and inclusion. The invitation pool included an oversample of scholars who teach at institutions that are ranked among the “Top-20 Most Conservative Colleges” by The Princeton Review.

The survey asked respondents to rate the “greatness” of the 14 presidents in three categories of leadership that provided them with opportunities to promote diversity and inclusion—the use of executive power to protect of the constitutional rights of ethnic and racial minorities, LGBTQ Americans, and women; the use of inclusive rhetoric about ethnic and racial minorities, LGBTQ Americans, and women; and the use of the Article II powers of appointment to include ethnic and racial minorities, LGBTQ Americans, and women. Perhaps the most noteworthy finding is that our experts rated the 14 presidents substantially lower on their diversity and inclusion leadership than they did on their overall leadership. Whereas 9 of the 14 modern presidents garnered 50 points out of 100 from our panel for their overall leadership, only Barack Obama and Bill Clinton were rated above 50 points for their leadership on diversity and inclusion. As Figure 2 illustrates, the average score on the diversity and inclusion index was 35 points out of 100.

Figure 2 also highlights the fact that our experts identified LGBTQ issues as the area where the modern presidents have been most deficient in providing diversity and inclusion leadership. Only Barack Obama scored above 50 points on presidential leadership on LGBTQ issues. These findings present a sober reminder of the challenges that LGBTQ Americans continue to face to gain representation in our national political discourse. It is also noteworthy, that George W. Bush, the only Republican president to rank in the top 5 on overall D & I leadership, would have earned a much higher ranking from our experts if they had perceived him as more engaged on LBGTQ issues. Finally, President Trump had the lowest score—8 out of 100—on LGBTQ issues of the presidents to hold office since the 1969 Stonewall uprising. 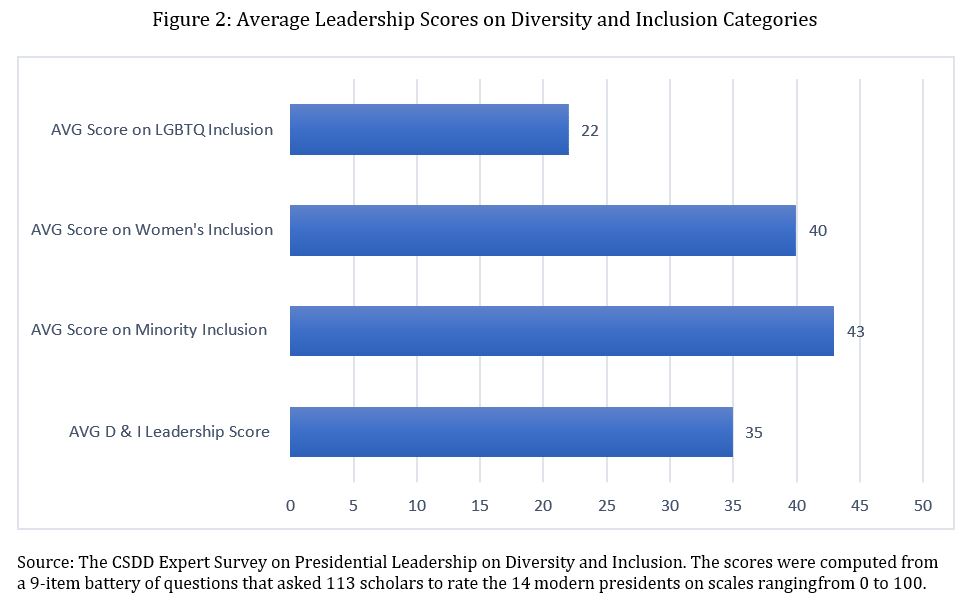 A Diverse but “Liberal” Pool of Experts:

Several studies have demonstrated that political liberals are overrepresented within the faculty ranks of U.S. colleges and universities. The consensus view within the literature is that about 10 percent of the faculty are self-identified “conservatives.” Our oversample of faculty members working at institutions on Princeton Review’s “Top-20 Most Conservative Colleges” yielded a respondent pool that is consistent with these national trends, with only 13 percent of the respondents describing themselves as either moderate, slightly conservative, or conservative. The facts that our overall D & I ratings placed several Republican presidents—George W. Bush, George H. W. Bush, and Gerald Ford—at or above the mean rating and that we found similar patterns of ratings across the ideological spectrum gives us confidence that the poll is not tainted with ideological bias.