#BlackLivesMatter and the Georgia Runoff Elections

Survey on #BlackLivesMatter and the Georgia Runoff Elections

The events of 2020 heavily impacted the attitudes and actions of Black citizens, turning the tide for the 2020-2021 U.S. election season

By Tabitha Bonilla, PhD and Alvin B. Tillery, Jr., PhD

We examined the impact of four messages (experimental conditions) about Senator Mitch McConnell’s likely policy agendas if the Republicans retained control of the Senate after the Georgia runoff elections scheduled for January 5, 2021. The four messages were as follows.

Throughout his career, Senator McConnell has opposed stimulus packages aimed at providing financial support to the American people in times of crisis. For several months, he has used Republican control of the Senate to block the Democratic Party's efforts to pass a coronavirus relief bill that would extend unemployment and housing benefits to millions of Americans. If Senator McConnell maintains control of the Senate, he will continue to use his power to block this important coronavirus relief package to help Americans with their basic needs.

Throughout his career, Senator McConnell has opposed universal healthcare coverage for all Americans. He has used Republican control of the Senate to undermine Democratic efforts to increase coverage for uninsured Americans through Obamacare. If Senator McConnell maintains control of the Senate, he will use his power to try to dismantle Obamacare.

Throughout his career, Senator McConnell has opposed the #BlackLivesMatter movement. He has used Republican control of the Senate to undermine Democratic efforts to promote common sense police reforms--like banning chokeholds and no-knock warrants--to make Black Americans safer in their communities. If Senator McConnell maintains control of the Senate, he will use his power to try to expand police budgets and the transfer of military-style weapons to police departments around the country.

Throughout his career, Senator McConnell has opposed the #SayHerName movement. He has used Republican control of the Senate to undermine Democratic efforts to promote the protection of Black women from state violence. His protege in Kentucky, Daniel Cameron, was the prosecutor who decided not to hold the police officers who killed Breonna Taylor accountable. If Senator McConnell maintains control of the Senate, he will use his power to try to expand police budgets and thwart the ability for the Black community to hold police officers accountable for violence against Black women.

We tested these experimental treatments against a control condition that described McConnell’s preferences for low taxes. We then asked a series of questions about how motivated the respondents would be to donate, phonebank, write a postcard, and post on social media in support of Raphael Warnock and Jon Ossoff. We also asked about how much they approved of McConnell, how important a Democratic win would be, and if they believed the votes in Georgia would be fairly counted.

The results are displayed in the figure below, which describes the percentage difference of each of the displayed messages over the control condition about taxes. We find that the two police reform treatments positively shifted opinions, but in different ways. Discussion of police reform and Breonna Taylor significantly increased the likelihood of Black Americans to make donations. The message about Black Lives Matter increased perceptions of the importance of a Democratic win in Georgia. And all messages, except the message about Breonna Taylor decreased the respondents’ approval of Mitch McConnell significantly. 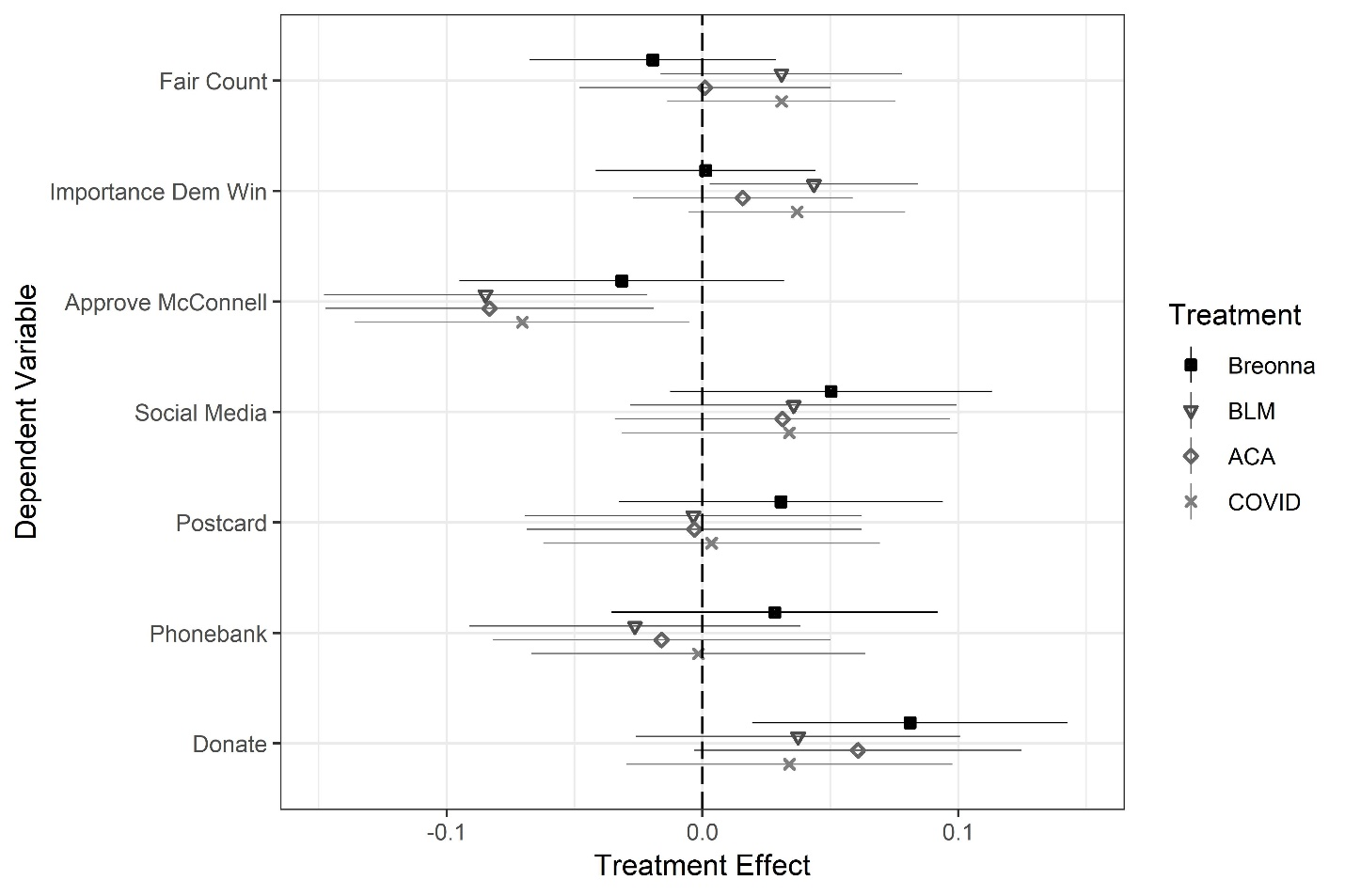 We believe that the results of this survey experiment provide the Democratic candidates in the Georgia Senate runoff elections with clear opportunities to leverage the energy of the #BlackLivesMatter movement to nationalize the election and boost fundraising among Black voters. We also hypothesize that messaging related to the Black Lives Matter movement will likely boost turnout among Black voters in Georgia. We will test this hypothesis with a Georgia-based sample in coming days. Finally, we see our findings on police reform—that most respondents do not want abolition of the police—as providing potential solutions to Republican attacks on the Democratic candidates about the Black Lives matter movement.

We conducted a survey experiment on 1325 Black Americans through panels maintained by Cloud Research. The sample was census matched on age and gender. The analyses presented here are restricted to the responses of the 1031 Black Americans in the sample who reported that they identify as or lean towards identifying as Democrats.