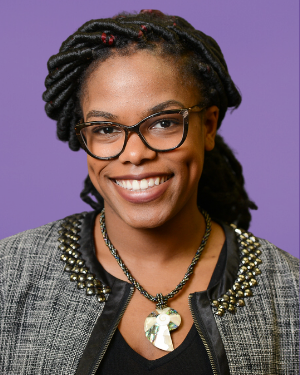 In this interview, we catch up with 5th year Northwestern political science PhD candidate Andrene Wright on her CSDD-funded project. Gaines discusses her journey to academia as well as her dissertation entitled "Black Women’s politics and their use of experiential rhetoric" where she focuses on the campaign rhetoric of Keisha Lance Bottoms, Lori Lightfoot, and Muriel Bowser. This interview has been edited for clarity.

How did you get your start in academia?

I feel like my story is very much like a lot of other first generation American-born stories, as they transition into academia. When I first started undergrad, I thought I wanted to be a lawyer. I studied political science because I thought law school admissions committee would want to see that. So, I took this course called Women in Politics with Professor Samantha Majic. She asked me to come to her office to talk to her about my future and she told me that I could do a PhD program, when I had no idea that that was possible.

She then introduced me to a program called the Ronald E. McNair program McNair program - it's a federally funded outreach program part of the Mellon-Mayes program. This program allowed me to do my own research as an undergraduate under a faculty advisor - Dr. Majic was mine.

Everything was pretty much linear after that - I went from the McNair program to the summer research opportunities program here at Northwestern where I did research with Dr. Alvin Tillery. While I was here as an undergraduate, I got acclimated to Northwestern and I got to know Prof. Tillery and applied to the Northwestern PhD program.

The project that the CSDD is funding for me is my dissertation project – it’s titled “Black Women’s politics and their use of experiential rhetoric”. Specifically, I look at the rhetoric they deploy and how they use their lived experience as a means of persuasion. My first paper, which is what I currently have funded by my CSDD grant, is looking at Black women in politics, how they express themselves, and how they define their political activism. I am anticipating their approaches to be different from their racial or gender counterparts that they run against. I am looking at Black woman mayors on the campaign trail and the strategies they use, specifically Keisha Lance Bottoms, Lori Lightfoot, and Muriel Bowser.

I am noting the kind of buzz words that they use when they're talking, looking at experiential rhetoric. E.g. how often do Black woman mayor's start leveraging their lived experiences? How often do they say things like, “oh you know as a Black woman I feel like this is really important to me in my community because I am raising Black boys”?

The CSDD funding comes into play is that I have to collect and transcribe the data. I also have to put it into a software called NVivo. All of these steps take money which is helping with the first and second sections of my dissertation.

For example, I asked questions about whether or not a criminal justice policy leverages or galvanized prospective voters to support Black women mayors, and whether or not expressing Black identity while discussing these issues increases the mobility of the general public. I'm performing a series of experiments to understand how the identity of a mayor and the agenda frame they posit can impact support for a particular policy. With the CSDD funding these expensive experiments, it’s a huge help for my research.